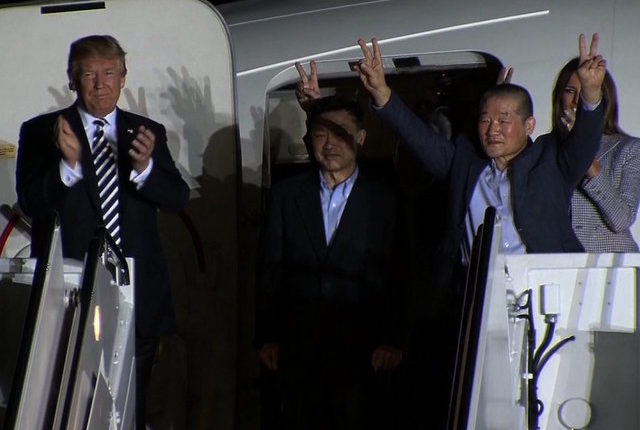 Trump Welcomes 3 Released Americans from North Korea. In the US, three Americans released by North Korea have been welcomed by President Trump. Accompanied by Minister of Foreign Affairs Pompeo, the trio arrived in the middle of the night (3 am local time) under excellent media coverage at Andrews air base near Washington, reports Down Town News.

Trump and his wife boarded the plane. Shortly afterwards they came out with the three. Trump was talking about a “special night” and thanked the North Korean dictator Kim Jong-un for the release. Trump called it “a huge thing” and. According to the president, Kim Jong-un is keen to make North Korea part of the international community.

The release of the three was uncertain until the last moment. Only one hour before the plane from Pompeo in North Korea took off; an agreement was reached about the release of the three. Kim Dong-chul, Kim Hak-song and Tony Kim spent more than a year behind bars in Asia for hostile acts against North Korea or espionage. Kim Dong-chul said he was treated differently. By an interpreter, he said that he had to perform forced labour, but was also treated when he became ill.

Their families were not present at the air base to welcome the released prisoners. Why is not known? However, Vice President Pence and his wife were present at the arrival. After the plane had landed with the three, it taxied to two fire engines that held up a giant American flag, to stop just before that.

Ex-Topman Insurer Anbang Gets 18 Years in Prison for Corruption