A Trip to the Land of Buddha

TravelEntertainmentThailand
By Claire Bogan On May 10, 2018 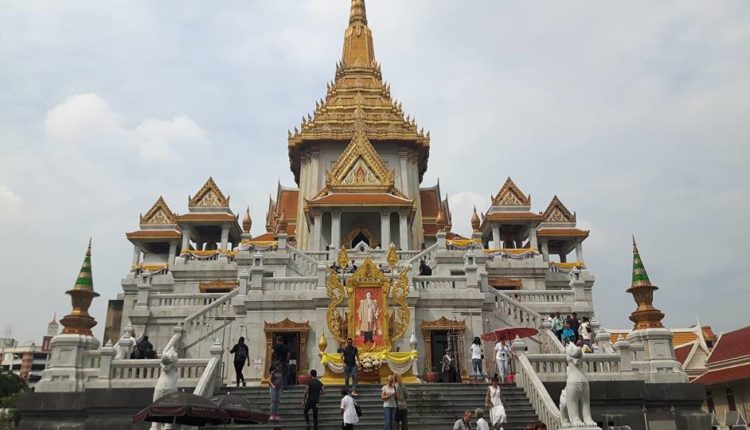 Thailand is a country bursting with buzzing markets and full moon beach parties, tropical forest with international camps, backpacking Thailand and breathtaking views. But this is not all; you can enjoy a spiritual journey on this land of Buddha by visiting the exotically designed temples.

95% of its population devotedly follows the teachings of Buddhism. Religion permeates the daily life in Thailand as you see a monk walking down the streets not only during the festive season but any normal day. Not only this; there are around 40,000 temples in Thailand with complex and surreal architecture that speaks volume about Thai history and culture.

A temple in Thailand mainly consists of bell-shaped dome known as a stupa, multiple tiers of roof adorned with thin ornaments at its corners called chofahs. The building has sermon halls, mausoleums, idols and images of Buddha, and monk’s residential area. What’s best is that these temples are open for tourists who can visit and experience the richness of Buddhist culture. Here, we have listed down a few of the temples in Thailand that you must visit on your trip.

Wat Pho (The Reclining Buddha):
It is one of the oldest temples in the city of Bangkok dating back to 200 years. The temple sits next to Grand Palace at 20 acres of land – the largest temple in Thailand. It is famous for its 20ft monument of reclining Buddha with around 1000 statues of Buddha.

The temple was rebuilt by Rama I when the capital was shifted to Bangkok. The Reclining Buddha statue depicts the moment when Buddha attained enlightenment. Not only this, the foot of the statue showcases the 108 virtuous characteristics of Buddha.

The temple is divided into two sections: the northern and southern. The former is a much famous tourist point as it has a huge temple hall surrounded by 394 bronze Buddha statues. The four chedis are constructed to honour the first 3 kings; however, two of them are dedicated to King Rama III. There are lot many things to see at the temple such as chapels, rock gardens, statues of Buddha, fortune tellers, and also the library which is constructed over a library.

Wat Rong Khun (The White Temple):
The White Temple is the most distinguished temple in Chiang Rai which is designed by Thai painter Chalermchai Kositpipat. The architecture of the temple represents the teachings and preaching of Buddha in a very unconventional manner. The white colour of the building represents the purity of Buddha whereas the mirror mosaic is a true representation of wisdom and obstacles faced in the path of enlightenment.

Wat Arun (Temple of Dawn):
It is one of the most published sites of Bangkok and is the most famous landmark of the city. The temple derives its name from Hindu god Aruna, the rising Sun and that is why; the temple is also known as Temple of Dawn. It has one massive prang almost 104m high which is surrounded by four smaller prangs.
The architecture of this building is not very much detailed as compared to other temples; however, the murals and main statue of Buddha is said to be designed by King Rama II.

Working as Nanny for Children with Special Needs