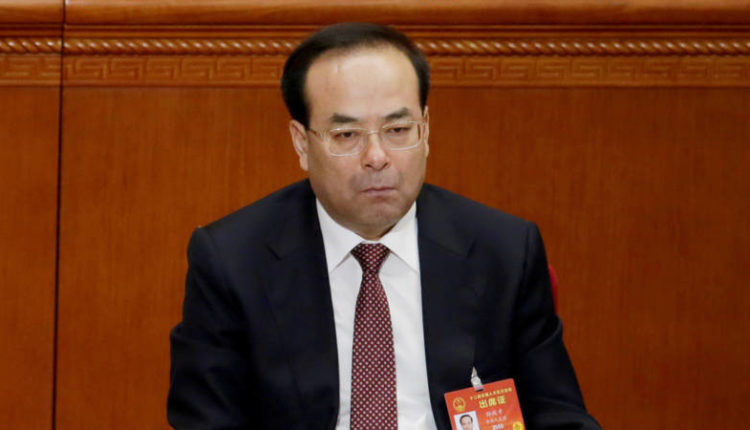 A former member of the Chinese politics bureau has been sentenced to life imprisonment for fraud. Sun Zhengcai is accused of having taken bribes for more than 20 million dollars, reports the EYE News.

Because of his relatively youthful age – with his 54 years as the youngest member of the politburo – Sun was seen by a part of the Communist Party as a contender for a top position in the party and as a potential successor to President Xi Jinping.

The reason for his departure last summer was that he had violated the party rules, which probably meant that he did not propagate the ideology of the party in the right way.

Now that he is convicted, it appears that Sun Zhengcai was thus accused of corruption. From his time in Beijing, as also Minister of Agriculture and as party secretary of the million cities of Chongqing, he appears to have taken the money and accepted bribes, including from construction companies that wanted to collect orders for large projects.

“The classic corruption system,” says correspondent Marieke de Vries. “Before Xi Jinping came to power in 2013, that was more the rule than the exception in China, that’s how it worked.” But under Xi, corruption is being tackled hard.

In Chongqing, a challenger of Xi Jinping already fell: Bo Xilai. He too was guilty of corruption. “Sun followed him and had to make a clean ship in the city, and it is remarkable that he, like Bo, fell just before an important party congress.”

It seems, according to De Vries or Xi Jinping, to send a signal just before he had to consolidate his power at the party congress.

Sun is the fourth member of the politburo that was arrested for corruption. He was the only one who was still in office. “He is not the first and certainly not the last”, says De Vries. His conviction is part of a broad campaign. In total, more than a million officials have been prosecuted for corruption.

“But critics suspect that it is mainly in the highest regions that there is more a political purge than corruption since everyone at the top has made dirty hands to come where it is now.” The confidants of Xi Jinping are not being dealt with.