UgandaAfricaNews
By Claire Bogan On Apr 22, 2019 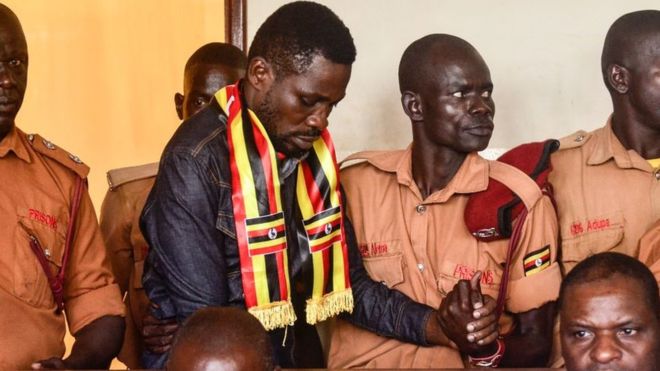 The police in Uganda has arrested a prominent critic and potential challenger of President Yoweri Museveni. The musician known by his stage name Bobi Wine was arrested because he wanted to give a concert that had previously been banned by the authorities.

The police stopped the concert area on Lake Victoria to the south of the capital Kampala and cancelled the performance.

When Wine tried to reach the location at his private club on Lake Victoria, skirmishes broke out. His supporters threw stones at the police, who responded with tear gas and a water cannon.

The 37-year-old pop star, who is also a Member of Parliament and whose real name is Robert Kyagulanyi, is one of the most prominent Museveni critics (74).

He wants to participate in the next presidential election in 2021. His appearances in Uganda regularly attract thousands of fans. The authorities had banned Monday’s concert because of unspecified concerns about the intended security measures.

The wine was released after a few hours. No charges have been filed against him, a police spokesman said.

The pop star was also arrested last year. Then he was tortured, he says. He went to the United States for medical treatment. As a result of that arrest, he became even more famous and popular.